What is ‘Deadly Illusions’ About?

Marry is a novelist who is happily married to Tom. She is living happily in her mansion with two young kids. She gets a publisher’s request to write another thriller novel with an offer of $2 million in advance. She declines the offer but is later forced into accepting it when her husband tells her he has lost a lot of money in a shady business deal.

To cope with the demands of writing and raising kids, Mary follows her friend Elaine’s advice to hire the services of a nanny called Grace. Mary develops a sexual relationship with Grace and dreams about Grace having a kinky relationship with her husband. She fights with Grace and Tom but later apologizes to both of them. She calls up nanny service to be told that they do not have any nanny by the name of Grace on their rolls. Mary is horrified and goes to talk to Elaine but finds her dead in a bizarre turn of events.

The police find Mary as the main suspect in the murder of Elaine as CCTV footage reveals a woman similar to Mary leaving Elaine’s house, wearing a headscarf and sunglasses. Mary decides to dig out the background of Grace. She travels to her hometown, where the aunt of Grace tells her that her parents abused Grace as a child. She learns that Grace is suffering from dissociative identity disorder and has developed another personality called Margaret to escape her troubled past.

Kristin is best known for her character of Charlotte in the HBO series Sex and the City.

An American actress & Beauty queen. Best known for her role as Lissa Miller in the MTV series Awkward & currently in the 2021 Netflix-released film Deadly Illusions.

What happens in Deadly Illusions ending?

The movie ends with Mary going to Elaine’s grave to dedicate a copy of the novel to her memories. She also visits Grace, who is being treated in a mental hospital. Audiences are confused when Mary is shown wearing the same scarf and sunglasses as she comes out of the hospital.

The cast of Deadly Illusions

Where was ‘Deadly Illusions’ filmed?

The entire movie was shot in Albuquerque, New Mexico, in 2019.

It is difficult to explain Deadly Illusions, particularly the ending where Mary is shown walking out of the hospital wearing a scarf and sunglasses. Audiences are left puzzled as if she is the one who murdered her friend Elaine. Grace is shown getting treatment in a mental hospital to prove her dissociative identity disorder.

With Deadly Illusions being so questionable, it’s likewise conceivable that Elaine is a imaginary companion of Mary’s and never at any point existed, which upholds another hypothesis about the consummation of the film. 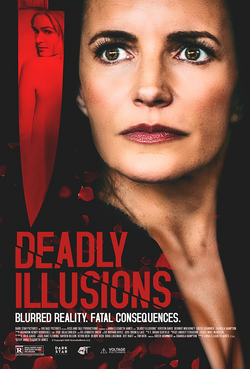