Hi girls, few days back Anamika from “WiseShe” shared a wonderful idea on her blog, that is how to make tinted lip-balm or gloss at home. So, how could I have been left behind from experimenting such an attractive idea. 🙂

I was planning to try it out on coming sunday, but then as usual I got super-excited with this whole concept that yesterday night around 3 I performed my own little stunt with this cute creative process. (Ahhh.. I am planning to start a production house of lip-balms soon just because I enjoyed a lot while doing it.) …lol.. 😉

Here is what I did. I started off with collecting everything on the table. (But, as usual forgot a lot of things in the process, and had to get up a lot of times to bring them). 😀 Well, some items are missing from this pic. 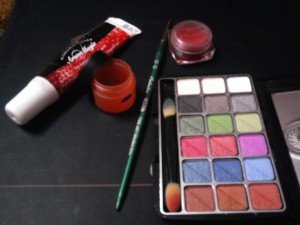 Ok, you need to have either vaseline or some old non-tinted lip-balm (which you don’t feel like using anymore). Apart from that you would need a lipstick/eyeshadow of a color of your choice (since, I am always on extremes, I used both ;)). Then, you would need a tooth-pick or brush to mix them together and a tiny tub/bottle to keep them.

First of all, I took out that old lip-balm from the tube into the tub (I didn’t even knew it prior to this that this was not exactly without any tint. But, since it was in tube and I never had any color on my lips after using it; I always thought that it would be non-tinted). But, anyway, I didn’t like using that lip-balm, so I had to use that one only for this procedure.

Now, since I used it very rarely, it was almost full. Then I thought to divide into two tiny pots and decided to make two balms separately.

Then, I took a lipstick in pale pink color (looking much darker in the pics) and took its tip off with the help of a scissor and mixed it into the pot. You can increase or decrease the amount of lipstick according to your preference of how much pigmented you want it to be. 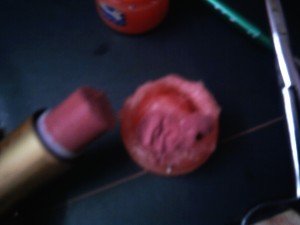 Then, I mixed them both with the back of a painting brush. I got a very fresh rosy/pink color after mixing them both well. You can see how does it look from next pic, where I swatched it on the back of my hand. 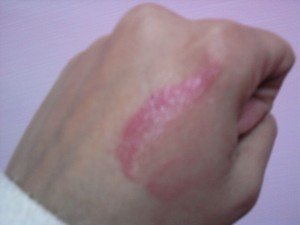 Now, let’s move to the second one. This time, I decided to give it a try with an eyeshadow color. Since I am these days into Coral-Obsession-phase, I took an eyeshadow in orange color for this one (shown in the upper right corner of the palette). 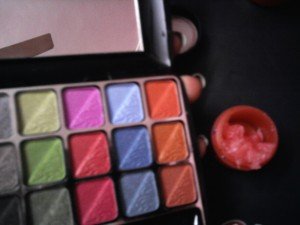 I used almost half of its amount and mixed them well together. And if you wonder about that whether eyeshadows would be safe to use on lips or not, then let me tell you that YES they are! As all eye-products are made for very-sensitive skins and they all are free from harmful chemicals. And well, if you can use them on eyes (which are way more delicate than lips), you can definitely use them for lips too. 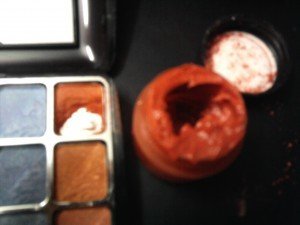 So, here is the swatch of this balm. It’s exactly the shade which I wanted it to be. And I even wore it today for college. 🙂 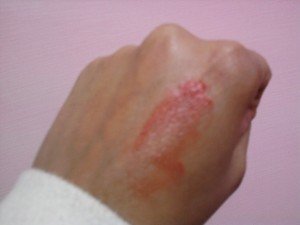 Now, this is the pic of finished and all-ready products. Aren’t they looking very cute??? 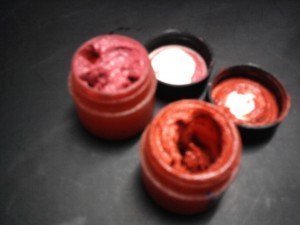 Well, I took another pic of them with Avon lip-balm which comes in a light reddish tint, just to have  a comparison (and to boost up my ego for making something as wonderful as AVON lip-balms). 😀

You can even microwave them for few seconds in case of having some problems while mixing them (just don’t let them boil). But, so far in my case, I was able to mix them well without any issue at all. 🙂

So, friends what u say??? I am sure even you guys would be dying to try it out as soon as possible, as who gets so many colored lip-balms at such a cheap rate. I was thinking to try those tiny vaseline tubs (INR 5/-) from next time onwards, as they are super cheap plus we can get a tiny jar free with that. 😉 Right friends? Leave me your comments to share your experiences. 🙂