Why is Jewelry Important in Fashion?

Traditional Indian jewellery reflects the history of India. Even the Indian historical mythology like the Ramayana and Mahabharata talks about the jewelry by defining the beauty of women. The fact that jewellery improves one’s appearance became widely accepted and common long back about 7000 and 8000 years.

No wedding is considered complete without showcasing wedding jewellery and this is true everywhere.

Jewellery has been in fashion in different forms like stone jewellery, flower jewellery, pearl jewellery not in the modern world but also thousands of years ago. Proofs are easily available as found with dead bodies or mummies.

Jewelry is seen as auspicious in Indian culture and society. Traditionally it is given as gifts and worn as a sign of auspiciousness to beckon good omen. Since the beginning of civilization, jewellery has been an essential component of Indian attire.

Collection of costly jewellery shows the owner’s vast richness, financial capability and prosperity just like a nation’s gold stocks represents financial security in times of economic uncertainty due to its high monetary value.

Being a symbol of wealth and prestige, jewellery is adored by Indian women and is always a topic of discussion among them.

India was the first nation to dig and use diamonds for jewellery purposes. During the British rule they exploited this quality of Indian people followed by the mughals.

Both the exploiters used Indian knowledge and richness of jewellery to the full extent and in return contributed only a handful of knowledge of jewellery design.

To a certain extent, they passed on their expertise and the craft of jewellery creation to the burgeoning Indian artists.

Jewellery has a significant role in various Indian dance forms. Indian jewellery has been crucial in showcasing the beauty of many dance styles that are prominent in India, such as Kuchipudi, kathak, and Bharatnatyam.

Dancers who are classically trained in a variety of dance styles are adorned with brilliant Indian jewellery that gives them a beautiful appearance. An Indian woman wears numerous pieces of jewellery, and there is an ornament for practically every area of her body. There are jewellery items that accentuate the beauty of Indian ladies from head to toe like mathapatti, sheeshphool, ear rings, pasa, Besar, Timaniya, bajuband, bangles, waist band, payal and many others.

Let’s have a dive into the traditional Indian jewellery to get a sense of the nation’s rich and diverse heritage.

The mathapatti, Rakhdi, maangtika is a traditional headpiece in the Indian culture made of a metallic chain or thread with a hook on one end and an appealing pendant with a variety of patterns and precious or semi-precious stones attached at the other end.

Sister jewellery items called a paasa and a maangtika are worn on opposite sides of the head, with the maangtika being placed in the middle of the hair.

Along the hairline, Matha Patti or Sheeshphool decorated chains or strings are worn as jewellery. A central Maang tikka is always present with a matha-patti.

The magnificent Indian cultural earrings, which are typically made of gold and silver, come in a huge variety of designs and give the wearer a charming appearance. There is no shortage of styles, forms, weights, sizes, or colors for these unique jewellery items.

Today, men and women alike wear a wide variety of earring types, such as ear studs. Earrings can sparkle the look of any Indian or Western clothing, from classic Jhumkas to cutting-edge patterns and shapes.

Your ears are “enamored” by earrings. Earrings with traditionally thick and detailed work give a person’s beauty a new dimension. Chandbalis are named after the moon, the most attractive celestial body. The appearance is given a magical air by earrings in the form of a moon.

Jhumkas are as old as our culture, and the Jhoomar style, which resembles a chandelier, an ethnic and ideal jewellery.

Since the early era of India’s maharajas, necklaces have been a traditional component of Indian jewellery and a symbol of royalty. Indian necklaces come in a variety of styles, such as the smaller gold Guluband choker or the lengthier pearl rani haar necklace.

Both men and women have worn intricate ornamental collars, pendants, strings of beads, and necklaces as a mark of social rank since antiquity.

Since the rajas and maharajas of ancient India, necklaces have been a symbol of royalty. Men wore necklaces with at least as much vigor as women.

As the name says, Rani Haar is a lengthy necklace befitting of the queens you are! Gulbandh, a traditional Rajasthani necklace worn by women such as the princess, sits just below the collarbone and is the perfectly flattering length.

Bangles are famous for the lovely tinkling sound that permeates every Indian celebration. Bangles are enticing spherical jewellery items that can be made of practically any material, including traditional wooden, glass as well as pricey metals (gold and silver).

Bangles with Meenakari work appear beautiful and are quite popular among young fashionistas. Since the beginning of time, India has been a popular place to adorn hands with bangles and mehendi. Haathphool rings are tiny hand jewellery that look charming and lovely.

They are tied to threads that are arranged in the shape of a spiderweb. Calcutta tode (elephant Kada) and Kada bangles in general are traditional bangles that will definitely adorn hands. Kangan/Kada are the traditional Indian bracelets, which are typically made of gold or silver.

Additionally, Punjabi brides Chooras, which are usually constructed of ivory and are sometimes found in a striking red and white combination.

Bangles can be solid, hollow, or lac-filled. The ends of the Kada include incredible, diverse designs inspired by nature, including two parrots, twin elephants, flowers, etc.

Indian hand accessories have a lot to offer, from diamond-studded bangles to brass bracelets to stone-set Kadas, adding more beauty to any look. 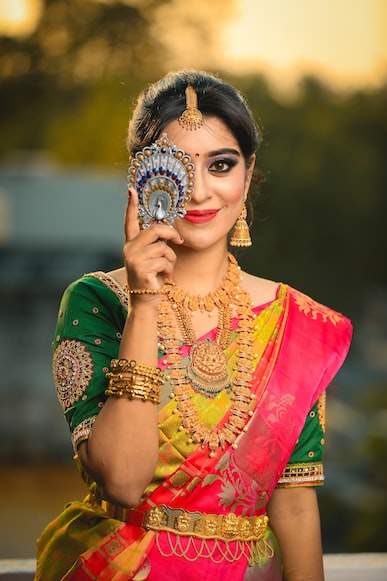